What is Lego Robotics? A Simplified Look Into The World of Lego Mindstorms

As a kid, I remember spending hours building Lego sets in my room.  I’d construct huge cities with buildings and even a monorail to connect it all.

These sets used the simple basic Lego blocks that came in various colors but more or less did the same thing: built a structure upward.

I would beg my mom for a new Lego set, happily receive it, escape to my room for a few quiet hours and get to work.  I’d emerge proud of my Lego spaceship, play with it for a bit, put it on the shelf and a week or so later…want a new set to build!

It’s a never ending cycle of Lego consumption.  While it’s great for kids to learn to focus and build with their hands away from a TV or ipad, it can get expensive quickly.

Years later, I see the same pattern emerge from my clients and their kids enrolled in my Lego Robotics summer camp, who constantly desire NEW sets to build.

Enter the Lego Mindstorms
In 2006, Lego introduced the Lego Mindstorms NXT, a set that took Legos into the world of robotics.  With just one set, a kid could construct, take apart and rebuild an unlimited amount of robots, some engineered by Legos and others created by Lego fans and shared online.

First, let’s backtrack.  What are robots?

A robot is:  “a machine capable of carrying out a complex series of actions automatically, especially one programmable by a computer.”

Robots are able to move AUTONOMOUSLY, meaning without anyone controlling them.  A robot must be able to physically move and perform the action intended, which can be as simple as a tank that has treads that moves forward or backward, to a robotic alligator that can bite, see and walk forward.

After the bot is constructed, a computer program must be built to bring it to life.

A program is an organized list of instructions that, when executed, causes a robot to behave in a predetermined manner.

Without a program, a robot is useless!  Lego Mindstorms provides programming software that is easy to understand and reads like a sentence. 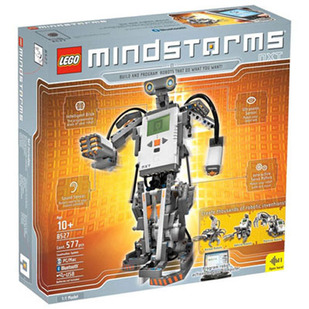 More advanced programs could interact with sensors to simulate the ability to see.  The ultrasonic sensor can detect movement, and you can make a program that triggers the motors to move the robot forward if an object comes within 10″ of the robot.

The sky is the limit when it comes to making a program!

In class, kids will learn about robots and programming and then say something like “Can I train my robot to do my homework?”  It’s a funny thought, and soon they learn that you’d have to build a robot that can:

1)     Move a pen and draw letters and numbers in certain areas on your paper.
2)     Use a sensor that can look at a paper, read it, and then write a very complex program that can understand language, math AND be able write a solution.

Obviously, it’s much easier to make a tank move forward and backward, which is a great starting point for young minds.

In future posts, we’ll go into more details of the sensors and motors, but I hope you now have a basic understanding of the Lego Mindstorms sets we use in our after-school and summer camps.

Lego Mindstorms evolved with the NXT 2.0 that was released in 2009.  These are the sets we use in our class because they are great for beginners and have a lot of cool robots to build, from the walking Alpha Rex humanoid bot to the super fun Hammer Car.

In September of 2013, Legos unveiled the Lego Mindstorms EV3 which featured a new color scheme, a few modifications to the motors but more importantly:  an advanced programming system AND the ability to control the bot through a smart phone.

The EV3 take more time to teach kids, and are for campers who sign up for 4-5 consecutive days of our camp so that kids can learn the ins and outs of the bot.

In my free time, I enjoy toying around with the different features of the Lego Mindstorms 2.0 and EV3.  I love that I can make up a robot, bring it to life and then take it apart.  What amazes me the most is how many new robots thanks to detailed instructions and programs provided by fans.

Now, my new Lego robots stand proud on my shelf, unafraid of any meddling cats that might try to knock them over.